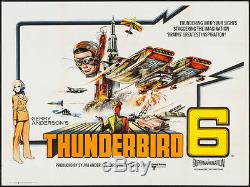 Vintage poster created for the British release of the second theatrical movie based on the Gerry ANDERSON cult TV series featuring the Tracy family and Lady Penelope. Format: British Quad: 30x40 (76x102 cm). The poster has been mounted on a foam board. Will be sent safely flat wrapped in a plastic sleeve then inserted in a sturdy cardboard box.

NO INTERNATIONAL FIRST CLASS is ALLOWED DUE TO LARGER SIZE (Not MY RULES). This is one of the many movie and music posters which can be found at ILLUSTRACTION GALLERY - ART THAT POPS! A brand new online poster gallery devoted to the celebration of the poster artists behind the art of the movie, music and comic book.

This item is in the category "Entertainment Memorabilia\Movie Memorabilia\Posters\Originals-International\1960-69". The seller is "illustractiongallery" and is located in New York, New York. This item can be shipped worldwide.