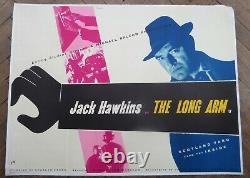 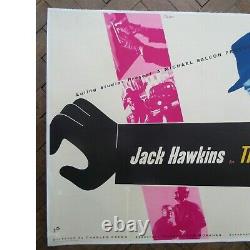 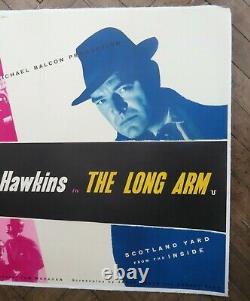 Linen backed and ready to frame looks excellent. Linen backing is a process whereby a poster is mounted to cloth, such as linen or cotton. Linen backing helps preserve the poster; makes the poster more durable; and is used by professional restorers to repair posters and return them to their original condition. Original Vintage Linen-Backed British Quad Cinema Poster (30" x 40"). Art and Design by Harry Stevens - Mid Century Designer, Poster Artist and Illustrator.

Harry Stevens, was born in Manchester in 1919 and died in 2008. With no formal art training, Harry Stevens started his design career in the exhibitions and display trade.

The Long Arm (USA: The Third Key) is a 1956 British film noir police procedural crime film starring Jack Hawkins. The film, which was based on a screenplay by Robert Barr and Janet Green, was directed by Charles Frend and produced by Michael Balcon. It was shot on location in London and Snowdonia in North Wales. Two years later Hawkins would reprise a similar role in John Ford's Gideon's Day, a film based on the books of John Creasey. The item "The Long Arm (1956) UK Quad Cinema Poster Ealing Film Studios Classic Crime" is in sale since Sunday, March 15, 2020.

This item is in the category "DVDs, Films & TV\Film Memorabilia\Posters\Originals - UK Quads\Pre-1970". The seller is "*lackery*" and is located in Ipswich. This item can be shipped worldwide.