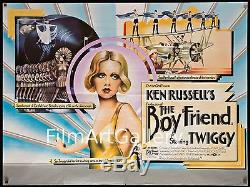 Original British Quad poster for the 1971 musical'The Boyfriend', directed by Ken Russell and starring the model-turned-actress Twiggy in her first starring role. This is the more colorful of the two different style Quads created for the film's release. This poster dates from the 1972 first release of the film in the United Kingdom (where it was shot). Poster measures 30x40 inches and is in fine condition: folded as issued with mild fold and edge wear, tiny stain at left top border, small pinholes in three corners and two minor bits of fold line separation at bottom border.

Overall nice shape and would look amazing after a simple linen-backing. Please note that the magnets in the corners are used during the photographic process and are not pushpins or elements of the design. PLEASE SEE OUR OTHER AUCTIONS AND STORE ITEMS FOR COOL MOVIE POSTERS. It must come back in the same condition as it was sent. FILM/ART has one of the finest collections of original movie posters.

The item "THE BOY FRIEND BOYFRIEND'72 British Quad blue Ken Russell Twiggy filmartgallery" is in sale since Saturday, May 16, 2015. This item is in the category "Entertainment Memorabilia\Movie Memorabilia\Posters\Originals-International\1970-79". The seller is "filmartgallery" and is located in Los Angeles, California. This item can be shipped worldwide.