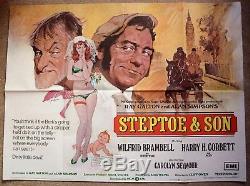 Steptoe and Son (MGM-EMI, 1972). Comedy featuring Wilfrid Bramble and Harry H Corbett. Albert Steptoe and his son Harold are junk dealers, complete with horse and cart to tour the neighbourhood. They also live amicably together at the junk yard. But Harold, who likes the bright lights in the West End of London, meets a stripper. Fine, but he marries her and takes her home. Albert, of course, is furious and tries every trick he knows to drive the new bride from his household.

See description above for condition and grading. The item "Steptoe and Son (1972) Film Poster Harry H Corbett Wilfrid Bramble- UK Quad" is in sale since Friday, August 10, 2018. This item is in the category "DVDs, Films & TV\Film Memorabilia\Posters\Originals - UK Quads\1970s". The seller is "fozz010" and is located in Calne. This item can be shipped to United Kingdom, North, South, or Latin America, all countries in continental Asia, Ireland, Australia, Germany, France, Greece, Italy, Spain.