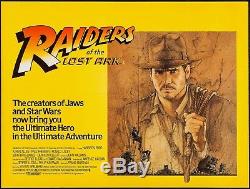 Original British Quad poster for the 1981 blockbuster'Raiders of the Lost Ark'. Steven Spielberg directed, based on a story by George Lucas (who was also executive producer) and starring Harrison Ford as Indiana Jones. The is the style with artwork by Richard Amsel - the same art used on U. The size is 30" x 40" inches and the condition is very fine: folded as issued but not used/posted, with only mild creasing and minor fold and edge wear. NOTE: PLEASE IGNORE THE BLACK MAGNETS IN THE CORNERS: THEY ARE USED DURING THE PHOTOGRAPHIC PROCESS AND AREN'T PUSHPINS, HOLES OR A DESIGN ELEMENT.

PLEASE SEE OUR OTHER AUCTIONS AND STORE ITEMS FOR COOL MOVIE POSTERS. FILM/ART has one of the finest collections of original movie posters. It must come back in the same condition as it was sent. The item "RAIDERS OF LOST ARK 1981 UK Quad A Steven Spielberg Indiana Jones Filmartgallery" is in sale since Sunday, November 4, 2018. This item is in the category "Entertainment Memorabilia\Movie Memorabilia\Posters\Originals-United States\1980-89".

The seller is "filmartgallery" and is located in Los Angeles, California. This item can be shipped worldwide.