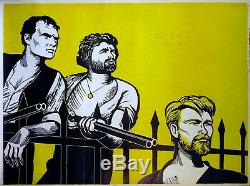 Original British 30 inch x 40 inch Quad Poster Proof (a trial print of the poster before the lettering is added) for an, as yet, unknown film. The poster art is by Peter Strausfeld.

Strausfeld was interned in the Isle of Man at the Onchan Internment Camp during the War where he met the Austrian producer George Hoellering. In 1947 Hoellering opened the Academy Cinema on Oxford Street and invited Strausfeld to produce some posters for the cinema which he did in wood and lino-cuts till his death in 1980. The posters became a London landmark, in fact very few were used outside of London, resulting in very small print runs of 3-500.

Most of these posters were printed at the prestigious Westminster Press and Ward & Foxlow. The poster is in very good unfolded (rolled) condition with slight surface crinkling, a few edge nicks and "LIGHT YELLOW" hand printed in ink in the yellow background. The item "PETER STRAUSFELD 1960s Unknown Film UK QUAD POSTER PROOF" is in sale since Sunday, June 21, 2015. This item is in the category "DVDs, Films & TV\Film Memorabilia\Posters\Originals - UK Quads\Pre-1970". The seller is "rarefilmposters" and is located in Kent. This item can be shipped worldwide.