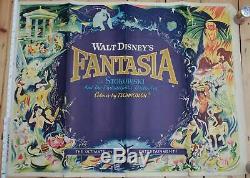 UK Quad poster for Disney's Fantasia, from the 1960s rerelease (very similar to the 1940s poster with some minor differences). This has been folded as is typical with UK Quads, but has ben kept stored rolled for several years. Came with a bunch of posters from someone who worked (as a projectionist, I think) at Liverpool's historic Woolton cinema, which I'm glad to say is still going today as a small vintage cinema. Wonderful colours in this stone litho printing of Walt Disney's "Fantasia" as performed with Stokowski with the Philadelphia Orchestra.

This early 60s re-release was printed in England by S. And includes all the major scenes from the film. More detail to be added shortly (I think there's a small split along the central horizontal fold on the left edge).