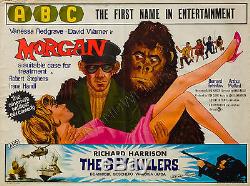 Was nominated for the Palme d'Or at the 1966 Cannes Film Festival. Fantastic 60s style, rare poster. Bought as part of a private collection from a relative of poster designer John Stockle. Appears to have only ever had a single centre fold, softened by being stored rolled. Small tears, scuffs and pinholes on edges.

For further details or information on backing or framing of this poster please see our website Orson & Welles. The item "Original Morgan 1966, UK Quad, Film/Movie Poster" is in sale since Saturday, April 26, 2014. This item is in the category "DVDs, Films & TV\Film Memorabilia\Posters\Originals - UK Quads\1970s". The seller is "orsonandwelles" and is located in Bath.