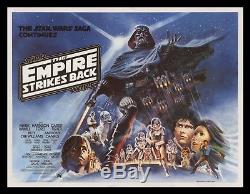 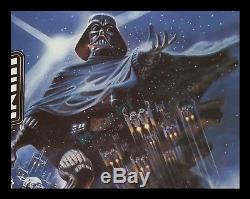 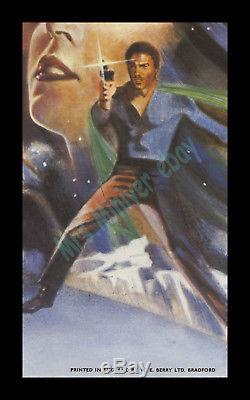 Here' s one of the mainstay posters in the Star Wars collecting hobby: A BONA FIDE ORIGINAL MINT/ROLLED NEVER-FOLDED 1980 30x40 inch British Quad on Star Wars THE EMPIRE STRIKES BACK. This has the fantastic Tom Jung art that was designed for the primary UK campaign when the film first came out. This poster is actually dated 1979 (see photo #3) but came out in 1980. This is a 100% RARE original - GUARANTEED! I ONLY sell genuine rare originals.

This rare beauty is in. SOLID MINT ROLLED NEVER-FOLDED CONDITION! If you're condition fussy and are looking for a clean one, and who isnt, this would be it! You won't be able to find a better one!

This Empire WHITE TITLE poster is IMPOSSIBLE to find in MINTY MINT MINT ROLLED C-10 CONDITION without the folds, as the NSS (National Screen Service) issued almost all of these quads folded throughout the UK. This one has recently been gloriously museum linen-mounted by the best mounter in the USA. All 100% archival materials were used! The poster prior to backing was in a. SOLID MINTY MINT MINT ROLLED-NEVER-FOLDED CONDITION.

It was backed because I wanted to make sure this rare top-notch specimen stayed MINT, and, a lot of my buyers have requested linen-backed posters, especially when a poster (like this one) has NO WHITE BORDER. The backing makes framing and displaying the poster easy and safe - without the risk of damaging the original. Is an accepted form of poster preservation by the Library of Congress and every Museum in the country. A lot of advanced poster buyers request and prefer linen-mounted posters because it makes framing and displaying the posters much easier - ESPECIALLY on borderless posters. This poster was made as a FULL-BLEED poster - with the art going right to the edge.

The white you see in the photo is the white of the Japanese paper lining the linen border margin. You can see how easy it would be to damage the original poster without that extra margin of protection. The backing makes the poster much safer to handle - it GREATLY reduces the risk of damaging the original. Also, all of my linen-backed posters have been stored FLAT so they DO NOT have a curl to them - They're ready for framing and display! Look at the gorgeous printing and stellar artwork of the entire cast (Billy Dee Williams included).

A British Quad is the UK's version of a one-sheet. It measures approximately 30x40 inches and was printed in in England (see photo #4). It's most appropriate to the film as well, given the film was mostly shot in London and half the cast was British. This poster has been preserved in a tube since 1980. As I stated above - It has been stored FLAT - So no curl. It will re-flatten out in a day or two if you store it flat again. If you're looking for an investment/museum quality item. Han Solo Billy Dee Williams.... Princess Leia Organa Alec Guinness.... Ben Obi-Wan Kenobi Anthony Daniels.... Darth Vader James Earl Jones.... It can crash regardless of any decision you make and can even crash regardless of any decision made by the company related to the stock - Leaving you with a near worthless piece of paper that won't inspire anyone! The magnificence of art and historic documents have an inherent value that relates to civilization and society. Please write with any questions. If you're in the market for top quality original vintage movie posters or Star Wars, then please.

The item "MINT/ROLLED'80 Star Wars THE EMPIRE STRIKES BACK BRITISH QUAD MOVIE POSTER" is in sale since Thursday, January 24, 2019. This item is in the category "Entertainment Memorabilia\Movie Memorabilia\Posters\Originals-International\1980-89".