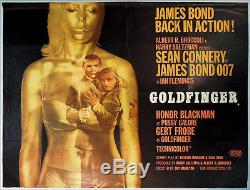 GOLDFINGER Movie Poster (United Artists 1964) Full-Bleed British Quad 30" X 40" printed by Stafford & Co Nottingham and London. THE AUTHENTIC ORIGINAL ENGLISH QUAD - A BEAUTIFUL POSTER. This was the film that firmly established many of the James Bond hallmarks, the crazy gadgets, the larger-than-life über-villains, and the legendary cars (this movie featuring the customized Aston-Martin). Add to the mix the already-present traditions, including the exotic locations, Sean Connery - the leading man, and of course, the electrifying beauty of the Bond girls. This movie set the standard for all Bond films to follow, and many fans still consider this the pinnacle.

Ian Fleming had already established the book as the most popular of the Bond series. The film's spectacular opening credit sequence designed by Robert Brownjohn is the source of this wonderful image for this English original poster. Featuring a giant gold-coated Shirley Eaton superimposed over Bond (Sean Connery) with his weapon drawn and clutching Pussy Galore - Honor Blackman.

Robert Brownjohn was the star designer of the 60s who with his friend Herbert Spencer, experimented at length with camera angles and projected lighting in a darkened studio. Brownjohn explained in an interview: It was all done in the camera, which is the way I like to do films, you know. I hate storyboards and scripts.

Its nice just to have an idea and go on the floor and play around with the camera and the lights, and then shoot what you want. This poster is a must for Bond collectors and perhaps one of the most desirable. This poster is in excellent condition. The item "JAMES BOND Movie Poster GOLDFINGER 1964 Orig Quad 30 X 40" is in sale since Saturday, February 9, 2019. This item is in the category "DVDs, Films & TV\Film Memorabilia\Posters\Originals - Worldwide\Pre-1970".centuryblues" and is located in Great Yarmouth. This item can be shipped worldwide.