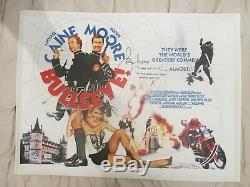 Original British Quad film poster from 1990. It has been linen backed but was in excellent rolled condition prior to this. It was signed when Sir Roger did an interview for the DVD release of the film at Pinewood Studios. This poster was actual in shot behind him and was signed after the interview ended.

Measures 30 x 40 inches, slightly larger with the linen edging. The item "BULLSEYE 1990 BRITISH COMEDY QUAD FILM POSTER Roger Moore Michael Caine SIGNED" is in sale since Saturday, December 7, 2019. This item is in the category "DVDs, Films & TV\Film Memorabilia\Posters\Originals - UK Quads\1990s". The seller is "woodpinela" and is located in Iver Heath.