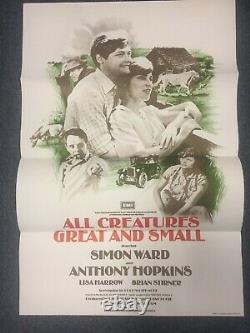 We are having a huge clear out and we are offering all the posters we have for this film in one lot. Great for a dealer as you will take control and there will be no one else in competition. There are about 50 lots I will be doing like this. A great opportunity to set up a poster business. On offer are 198 x tri-folded British One Sheet film posters measuring 27 x 40 inches. The posters are in mint undistributed condition. The posters comes from the StudioCanal archive and these are all original unused items. StudioCanal acquired the assets and archives to many well known film distributors including Ealing Studios, Associated British Pathe, Associated British Picture Corporation, British Lion, Anglo EMI, Thorn EMI, EMI, Cannon and Lumiere to name a few.

We have been tasked with disposing of much of this archive now it has all been digitised. This item is in the category "Films & TV\Film Memorabilia\Posters\Originals - UK Quads\1970s".

The seller is "thebritishmoviearchive" and is located in this country: GB. This item can be shipped to United Kingdom.