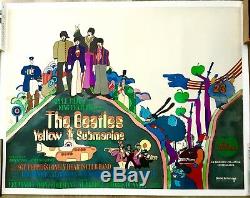 This is a first release, original 30x40 inch U. Quad cinema quad poster for the Beatles iconic, psychedelic animated fantasy. Poster is linen backed in very good-fine condition. The colours are strong - generally these posters show some fading to orange parts of the submarine itself and the orange reverb on the words the Beatles... There are some tape marks at the edges of the centre fold that need to be addressed and some other areas, especially along that centre fold line, that need attention.

It does look as if some retouching has been attempted in these areas, however it needs to be revisited in my view should you want a near-mint appearance. The tips of the top corners have also been replaced and its fair to say that a better finish could have been achieved. Other, much more minor signs of age and wear, however displays, on the whole, quite nicely and probably well enough for some buyers as is. Really depends on your preferred aesthetic. The item "Yellow Submarine The Beatles U.

Quad cinema vintage Film poster 1968" is in sale since Monday, September 17, 2018. This item is in the category "DVDs, Films & TV\Film Memorabilia\Posters\Originals - UK Quads\Pre-1970". The seller is "litho_lover" and is located in Wigan. This item can be shipped worldwide.