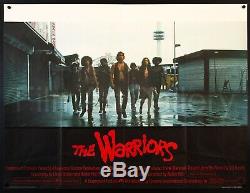 Original, first release, English Quad poster for the 1979 cult classic "The Warriors", co-written and directed by Walter Hill. This film was controversial when first released (due mainly to sporadic outbreaks of vandalism and three killings two in Southern California and one in Boston involving moviegoers on their way to or from showings). In the years since, its stature and popularity have continued to grow.

This is the ultimate "Warriors" poster, as it features a photo image of the main gang at the film's final scene at Coney Island. Poster measures 30" x 40" inches.

Condition is fine: folded as issued with some mild fold wear and creasing and some minor discoloration on reverse. No major flaws and would look mint-y after a simple linen-backing! Please note that the magnets in the borders are used during the photographic process and are not pushpins or elements of the design. PLEASE SEE OUR OTHER AUCTIONS AND STORE ITEMS FOR COOL MOVIE POSTERS. Check out our other poster listings - Film/Art has an extraordinary selection of original movie posters. The item "THE WARRIORS 1979 Best Style! UK Quad 30X40 poster Walter Hill Film/ArtGallery" is in sale since Thursday, May 9, 2019. This item is in the category "Entertainment Memorabilia\Movie Memorabilia\Posters\Originals-United States\1970-79". The seller is "filmartgallery" and is located in Los Angeles, California. This item can be shipped worldwide.