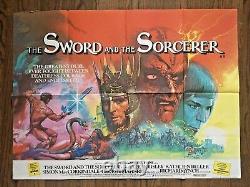 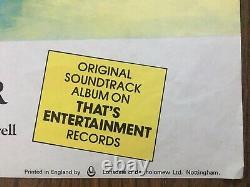 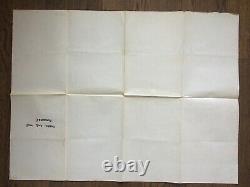 Vintage original 40 x 30 in. British quad poster from the popular 1980's fantasy action/horror adventure film, THE SWORD AND THE SORCERER , released in the US in 1982 and directed by Albert Pyun.

A mercenary with a three-bladed sword rediscovers his royal heritage's dangerous future when he is recruited to help a princess foil the designs of a brutal tyrant and a powerful sorcerer in conquering a land. The image features great artwork that depicts a very close shot of three of the film's main characters including. Lee Horsley, Kathleen Beller, and Simon MacCorkindale.

Depicted above a battle scene and another scene of a muscular man clad in a loincloth as he wields a huge gleaming sword as a beautiful woman lies nearby with a serpent rising above her. Folded as originally issued, this vintage original British quad poster was printed for the film's original theatrical release in the UK. It is in fine+ condition with light signs of wear on the edge of the top border on the first panel and some light bleed-through in the bottom right panel in the yellow background from where a prior owner.

The film's title in black marker on the verso. The colors are fresh and vibrant without any signs of fading and there are no pinholes, tears, stains, or other flaws. The item "THE SWORD AND THE SORCERER (1982) British Quad Poster Great Fantasy Artwork" is in sale since Tuesday, August 20, 2019. This item is in the category "Entertainment Memorabilia\Movie Memorabilia\Posters\Originals-International\1970-79". The seller is "silentcinema" and is located in Valley Village, California.