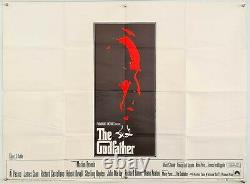 Revenge is a dish best served cold. Released in 1972, The Godfather is one of the most iconic films of all time, directed by Francies Ford Coppola and starring Marlon Brando as the iconic crime boss, Vito Corleone. The film features incredible performances from many actors, including Al Pacino, James Caan, Richard Castellano, Diane Keaton, Robert Duvall, Sterling Hayden, Richard Conte and many more! We have this single-sided and folded UK Quad (30 x 40 inches) listed in fine condition, due to some creasing and marks, along with some edgewear. The photo is of the actual item for sale. The item "The Godfather 1972 Original UK Quad Film Poster Marlon Brando Al Pacino" is in sale since Thursday, July 29, 2021. This item is in the category "Films & TV\Film Memorabilia\Posters\Originals - UK Quads\1970s". The seller is "poster_freaks" and is located in Yeovil. This item can be shipped to United Kingdom.