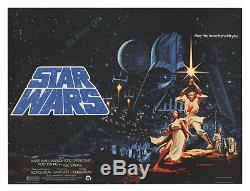 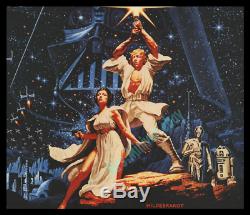 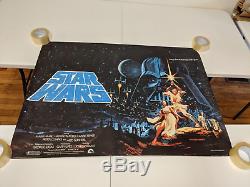 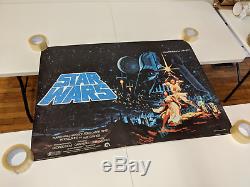 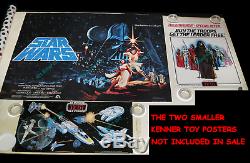 Sales are way down while everyone is finger pointing. In light of the sudden-death armageddon that has presented itself, I've decided to blow this poster OUT with an equally dramatic price drop. I normally would never do this, but since the end is near I feel I have no choice, and so now is your chance to get this at a tiny dot fraction of what it's worth! That has effected me will not last forever. Lest we forget that the end was near with Y2K, 911. Ebola, SARS, the hokey pokey, and, the Andromeda Strain!

So get this now if you can muster the strength or courage. Heres one of the RAREST and nicest ORIGINAL Star Wars posters of all time - A BONA FIDE ORIGINAL 1977. A British Quad is the UK's version of a one-sheet.

It measures 30x40 inches and was printed in England. This is the first of the British Star Wars posters ever made, and the ONLY to use this historic artwork rendered by the legendary Hildebrandt Brothers. YES, this is a 100% RARE original - GUARANTEED! I ONLY sell genuine rare originals.

Please check our feedback comments and other listings to get a feel for who we are. This Hildebrandt Star Wars art is arguably THE. Most famous movie poster artwork ever released, and, this is the rarest cinema poster version to use it! The Hildebrandt quad was only issued briefly in the UK as an advance. The Tom Cantrell quad, with artwork that shows better likenesses of the stars, replaced the Hildebrandt quad prior to the films official release in the UK. After the film became a sensation, the Hildebrandt artwork became a familiar sight around the world, appearing on a plethora of Star Wars products and/or their packaging. The most successful of which was produced by Factors Inc. It even outsold the famous 1970s Farrah Fawcett poster by MILLIONS of copies. This rare quad is in SOLID NearMINT C-9 ORIGINAL 1977 CONDITION!

The poster has barely seen the light of day. It really is in top-notch shape. The only defect, if you can even call it that, is a SLIGHT crease in the middle - slight meaning SLIGHT. Im NOT talking about a fold.

The poster only has a very minor bend in the middle, as if it were rolled over in tandem with other quads when it was originally distributed. If it were linen-mounted today, the crease would completely disappear without a trace. I've posted two professional photos and three regular snapshot photos that I saved from the time when I bought it.

ITS THE #1 SAFEST WAY! If you are looking for an investment/museum quality poster, look no further - YOU JUST FOUND IT! It can crash regardless of any decision you make and can even crash regardless of any decision made by the company related to the stock - Leaving you with a near worthless piece of paper that won't inspire anyone! The magnificence of art and historic documents have an inherent value that relates to civilization and society. Please write with any questions. If you're in the market for top quality original vintage movie posters or Star Wars, then please. The item "PANICSALE BELOW COST! Star Wars HILDEBRANDT BRITISH QUAD MOVIE POSTER C-9" is in sale since Wednesday, March 18, 2020. This item is in the category "Collectibles\Science Fiction & Horror\Star Wars Collectibles\Posters & Prints".miniver" and is located in Studio City, California. This item can be shipped worldwide.