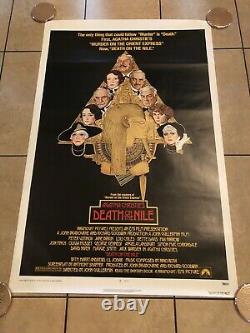 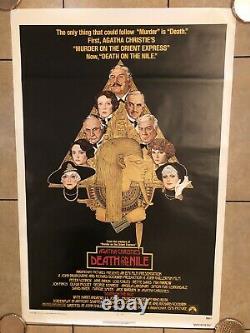 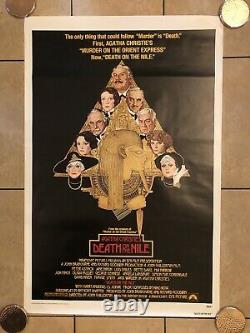 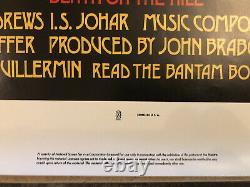 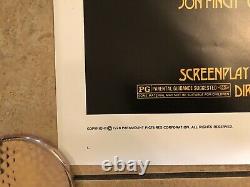 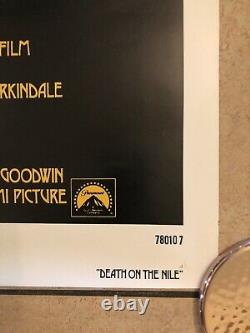 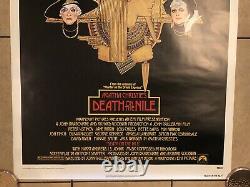 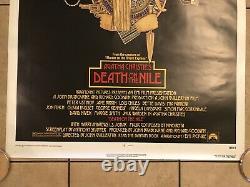 Agatha Christie Death on the Nile Original Movie Quad (1978). Listed as Used but in excellent condition. Folded as issued to cinemas. Some fold marks still visible but quad stored flat to help reduce these folded lines and protect quality of Quad.

Please refer to pictures for detail. Death on the Nile is a 1978 British mystery film based on Agatha Christie's 1937 novel of the same name, directed by John Guillermin and adapted by Anthony Shaffer.

The film features the Belgian detective Hercule Poirot, played by Peter Ustinov for the first time, plus an all-star supporting cast that featured Maggie Smith, Angela Lansbury, Bette Davis, Mia Farrow, David Niven, George Kennedy and Jack Warden. The film is a follow up to the 1974 film Murder on the Orient Express.

It takes place in Egypt in 1937, mostly on a period paddle steamer on the Nile. Various famous Ancient Egyptian sights are featured in the film, such as the Great Pyramids, the Sphinx, and temples at Abu Simbel and Karnak, sometimes out of sequence (the boat trip scenes start at Aswan, move downstream to Karnak, and then shift upstream to Abu Simbel). Death on the Nile won the Academy Award for Best Costume Design at the 51st Academy Awards. EMI Films had scored a huge success in 1974 with a film version of Murder on the Orient Express, and wanted a follow up. The movie was made during a period of expansion for EMI Films under Michael Deeley and Barry Spikings, who were increasingly aiming at the international market with films like The Deer Hunter and Convoy.

Death on the Nile was a more traditionally British film. The director, John Guillermin, had just made two blockbusters, Towering Inferno and King Kong. The item "Agatha Christie Death on the Nile Original Movie Quad (1978) nr Mint Condition" is in sale since Monday, February 22, 2021. This item is in the category "Films & TV\Film Memorabilia\Posters\Originals - UK Quads\1970s".