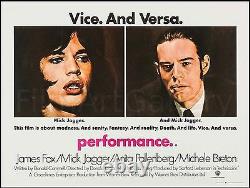 Original release linen-backed British Quad poster for the 1970 cult classic'Performance', directed by Donald Cammell & Nicolas Roeg and starring Mick Jagger, James Fox and Anita Pallenberg. This format is rare and features two great shots of Jagger. Size of the poster is 30" x 40" inches (linen border extends about 1 all around) and condition is very fine: originally folded with minor fold wear and a light scuff, the poster has been nicely linen-backed and looks great - ready to frame.

PLEASE SEE OUR OTHER AUCTIONS AND STORE ITEMS FOR COOL MOVIE POSTERS. It must come back in the same condition as it was sent. FILM/ART has one of the finest collections of original movie posters. The item "PERFORMANCE 1970 UK Quad poster on linen Mick Jagger Nicolas Roeg FilmArtGallery" is in sale since Monday, August 14, 2017.

This item is in the category "Entertainment Memorabilia\Movie Memorabilia\Posters\Originals-United States\1970-79". The seller is "filmartgallery" and is located in Los Angeles, California. This item can be shipped worldwide.