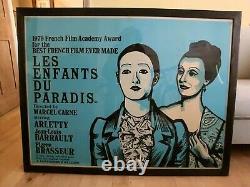 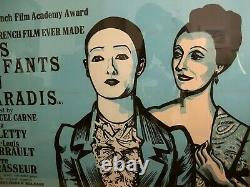 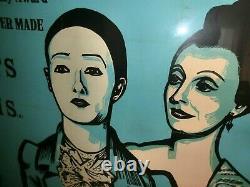 This poster, designed by Peter Strausfeld for London's Academy Cinema, advertises the showing of a new print of the 1945 film Les Enfants du Paradis. Directed by Marcel Carne, and featuring Arletty, Jean-Louis Barrault, Pierre Brasseur and Pierre Renoir was awarded the accolade of Best French Film Ever Made by the French Film Academy in 1979. Quad poster 30 x 40 inches (76.2 x 101.6 cm) inside a glazed wooden frame, 83 x 107.5 cm. The poster is mounted on card. The frame has been factored into the price. The poster is in good condition, with pin marks and cellotape residue in the borders (visible but not offensive), and fold marks flattened out in the mounting process. Predominant colour: a strong teal; the closest colour match is in the final photo. Any questions beforehand, please ask. The item "Original'Les Enfants du Paradis' Peter Strausfeld quad film poster, 1970s" is in sale since Sunday, January 3, 2021. This item is in the category "DVDs, Films & TV\Film Memorabilia\Posters\Originals - UK Quads\1970s". The seller is "kesss222" and is located in London.

This item can't be shipped, the buyer must pick up the item.