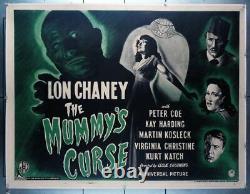 S final appearance as Kharis, the Egyptian mummy. The action of this film, which continues the story of Kharis and his beloved Princess Ananka, is supposed to take place in the same swampy location that was the setting of The Mummy's Ghost. But while the earlier movie was explicitly set in rural Massachusetts, this film strongly implies that the swamp is in Louisiana, with references to Cajuns and bayous.