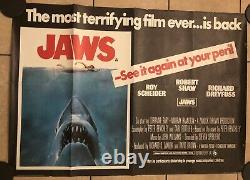 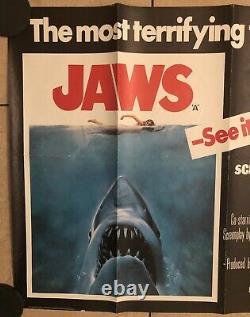 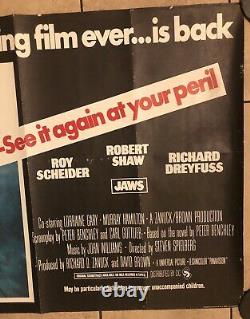 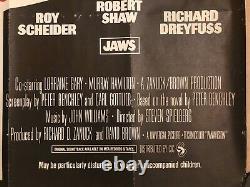 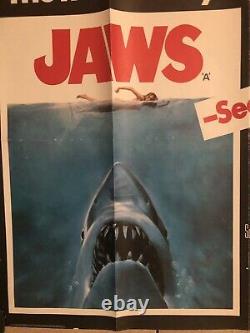 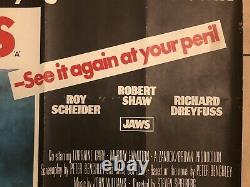 Note: Quad has been trimmed to fit Cinema Display but still measures 39.5in x 27.5in - 2inch reduction in standard Quad size is reflected in lower price. Only top black edging has been trimmed, actual image and text has not been affected. Quad still displays well - would look great framed. Please refer to pictures for detail. This Quad is the first re-release from 1976 in the UK (the first year of UK release). Jaws is a 1975 American thriller film directed by Steven Spielberg and based on Peter Benchley's 1974 novel of the same name. In the film, a man-eating great white shark attacks beachgoers at a summer resort town, prompting police chief Martin Brody (Roy Scheider) to hunt it with the help of a marine biologist (Richard Dreyfuss) and a professional shark hunter (Robert Shaw).

Murray Hamilton plays the mayor, and Lorraine Gary portrays Brody's wife. The screenplay is credited to Benchley, who wrote the first drafts, and actor-writer Carl Gottlieb, who rewrote the script during principal photography. The item "Jaws Rerelease Original UK Movie Quad (1976)" is in sale since Saturday, November 7, 2020.