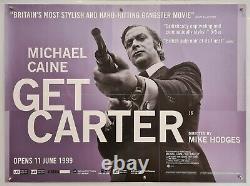 Here is something for fans of British gangster movies... Originally released in 1971, Get Carter is an iconic British crime film, directed by Mike Hodges and starring Michael Caine as Jack Carter, a Newcastle-born gangster. We have this single-sided and rolled UK Quad (30 x 40 inches) listed in very fine condition, due to some edgewear and minor marks.

The item "Get Carter 1999 BFI Release Original UK Quad Film Poster Michael Caine" is in sale since Monday, August 2, 2021. This item is in the category "Films & TV\Film Memorabilia\Posters\Originals - UK Quads\1990s". The seller is "poster_freaks" and is located in Yeovil. This item can be shipped to United Kingdom.