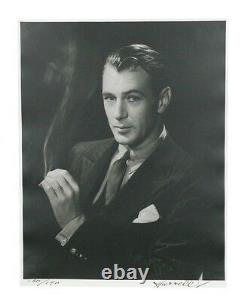 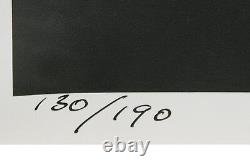 This Item is located in the US. Gary Cooper by George Hurrell Signed Photographic Print LE of 190 14" x 11".

Certificate of Authenticity is included. George Hurrell (June 1, 1904 - May 17, 1992) was a photographer who made a significant contribution to the image of glamour presented by Hollywood during the 1930s and 1940s. In the late 1920s, Hurrell was introduced to the actor Ramon Novarro, by Pancho Barnes, and agreed to take a series of photographs of him.

Novarro was impressed with the results and showed them to the actress Norma Shearer, who was attempting to mould her wholesome image into something more glamorous and sophisticated in an attempt to land the title role in the movie The Divorcee. She asked Hurrell to photograph her in poses more provocative than her fans had seen before.

After she showed these photographs to her husband, MGM production chief Irving Thalberg, Thalberg was so impressed that he signed Hurrell to a contract with MGM Studios, making him head of the portrait photography department. But in 1932, Hurrell left MGM after differences with their publicity head, and from then on until 1938 ran his own studio at 8706 Sunset Boulevard. Throughout the decade, Hurrell photographed every star contracted to MGM, and his striking black-and-white images were used extensively in the marketing of these Stars. Among the performers regularly photographed by him during these years were silent screen star Dorothy Jordan, as well as Myrna Loy, Robert Montgomery, Jean Harlow, Joan Crawford, Clark Gable, Rosalind Russell, Marion Davies, Jeanette MacDonald, Anna May Wong, Carole Lombard and Norma Shearer, who was said to have refused to allow herself to be photographed by anyone else. He also photographed Greta Garbo at a session to produce promotional material for the movie Romance. The session didn't go well and she never used him again. In the early 1940s Hurrell moved to Warner Brothers Studios photographing, among others Bette Davis, Ann Sheridan, Errol Flynn, Olivia de Havilland, Ida Lupino, Alexis Smith, Maxine Fife, Humphrey Bogart and James Cagney. Later in the decade he moved to Columbia Pictures where his photographs were used to help the studio build the career of Rita Hayworth. Gary Cooper Biography from Wikipedia. Gary Cooper (born Frank James Cooper; May 7, 1901 - May 13, 1961) was an American film actor known for his natural, authentic, and understated acting style and screen performances. His career spanned thirty-six years, from 1925 to 1961, and included leading roles in eighty-four feature films.

He was a major movie star from the end of the silent film era through the end of the golden age of Classical Hollywood. His screen persona appealed strongly to both men and women, and his range of performances included roles in most major movie genres. Cooper's ability to project his own personality onto the characters he played contributed to his appearing natural and authentic on screen. The screen persona he sustained throughout his career represented the ideal American hero.

Cooper began his career as a film extra and stunt rider and soon landed acting roles. After establishing himself as a Western hero in his early silent films, Cooper became a movie star in 1929 with his first sound picture, The Virginian. In the early 1930s, he expanded his heroic image to include more cautious characters in adventure films and dramas such as A Farewell to Arms (1932) and The Lives of a Bengal Lancer (1935). During the height of his career, Cooper portrayed a new type of hero-a champion of the common man-in films such as Mr.

Deeds Goes to Town (1936), Meet John Doe (1941), Sergeant York (1941), The Pride of the Yankees (1942), and For Whom the Bell Tolls (1943). In the post-war years, he portrayed more mature characters at odds with the world in films such as The Fountainhead (1949) and High Noon (1952). In his final films, Cooper played non-violent characters searching for redemption in films such as Friendly Persuasion (1956) and Man of the West (1958). Cooper had romantic relationships early in his career with several leading actresses, including Clara Bow and Lupe Vélez.

He married New York debutante Veronica Balfe in 1933, and the couple had one daughter. Their marriage was interrupted by a three-year separation precipitated by Cooper's love affair with Patricia Neal. Cooper's twenty-year friendship with Ernest Hemingway was grounded in their mutual love for the outdoors.

The American Film Institute (AFI) ranked Cooper eleventh on its list of the fifty greatest male screen legends. Local Pick-up is available in our showroom. Your continuing satisfaction is very important to us.

As one of the largest Coin & Jewelry Companies on the west coast, and also one of the best gold buyers, Continental has been the destination for coins, jewelry, fine art and collectible buyers and sellers for over 45 years. All items for sale are available for viewing at our Southern California showroom. We would like to thank all of our loyal customers for their continued support. Continental Coin and Jewelry Company Web Department. In the post-war years, he portrayed more mature characters at odds with the world in films such as The Fountainhe.

This item is in the category "Films & TV\Film Memorabilia\Posters\Originals - UK Quads\2000s". The seller is "continentalcoinandjewelry" and is located in this country: US. This item can be shipped worldwide.