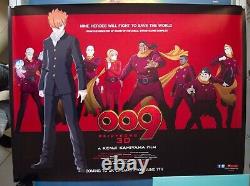 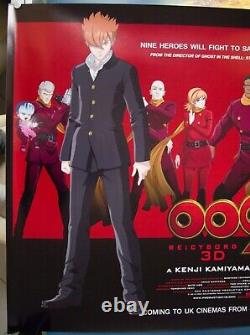 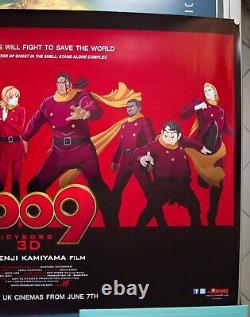 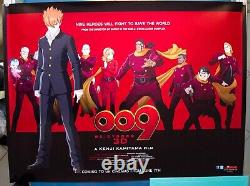 009 Re:Cyborg 3D (2012) Original film/movie poster. Size: 35" x 26" inch - 89cm x 66cm (perfect size for inexpensive framing). This poster is extremely rare and nearly impossible to find in any condition let alone, this one, which is in near mint condition. A limited print run as the film did not have wide UK cinema release. This poster originates from the Filmhouse (Edinburgh - UK), 2013 screenings.

This product is difficult to obtain even in Japan! Also screened at SCI-FI-LONDON Film Festival and Sci-Fi London's anime all-nighter. RE: Cyborg 009 Edinburgh Screenings in June. Edinburgh Filmhouse from June 7 to 10, more venue announcements coming soon.

The Edinburgh Filmhouse will hold seven screenings of the action/SF cinema film 009 RE:CYBORG from Friday June 7 to Monday June 10. According to the web-page, the screenings will be in Japanese with subtitles, and in both 2D and 3D versions. Writers: Shotaro Ishinomori (manga), Kenji Kamiyama (screenplay). Stars: Chiwa Saitô (voice), Daisuke Ono(voice), Hiroyuki Yoshino (voice).

Award-winning anime director Kamiyama (Ghost in the Shell: Stand Alone Complex) presents a mature, thought-provoking adaptation of Shotaro Ishinomori's legendary manga. Storyline: Anime adventure from'Ghost in the Shell - Stand Alone Complex' (2002) director Kenji Kamiyama. Nine cyborgs created for destructive purposes disappeared for over 27 years after they were forced to turn on their creators in the name of justice.

Now, as a number of seemingly unrelated terrorist attacks happen in locations throughout the world, the group reunites to battle against the devastating force and restore order to the globe once more. This item is in the category "Films & TV\Film Memorabilia\Posters\Originals - UK Quads\2000s". The seller is "charlesdicken" and is located in this country: GB.