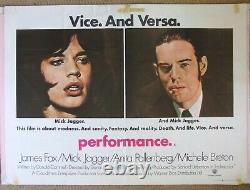 Rare Mick Jagger Performance UK Quad Movie Poster Original 1970 (First) Release. One of the iconic films of the 1970s, this like "Blow Up" has achieved cult status. This is a genuine UK poster for the original first release of the film. As can be seen in the images there is some damage which the poster suffered in its early year or years as evidenced by the tape discolouration. UK film posters were sent out to cinemas folded, so this will not harm it in any way.