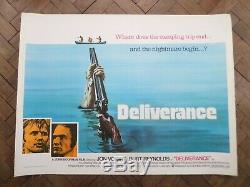 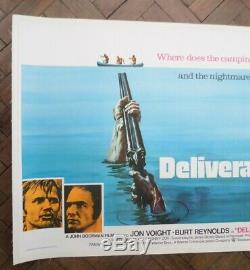 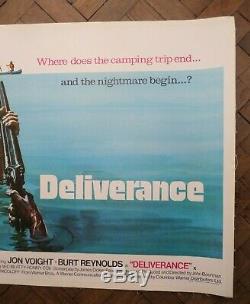 Deliverance (1972) UK Quad Cinema Poster Linen-Backed. Featured in the book'Film Posters of the 70's by Tony Nourmand. Condition is Very Fine on Line. Linen backed and ready to frame looks excellent. Linen backing is a process whereby a poster is mounted to cloth, such as linen or cotton.

Linen backing helps preserve the poster; makes the poster more durable; and is used by professional restorers to repair posters and return them to their original condition. Original Vintage Linen-Backed British Quad Cinema Poster (30" x 40"). Deliverance is a 1972 American thriller film produced and directed by John Boorman, and starring Jon Voight, Burt Reynolds, Ned Beatty and Ronny Cox, with the latter two making their feature film debuts. The screenplay was adapted by James Dickey from his 1970 novel of the same name.

The film was a critical success, earning three Oscar nominations and five Golden Globe Award nominations. Widely acclaimed as a landmark picture, the film is noted for a music scene near the beginning, with one of the city men playing "Dueling Banjos" on guitar with a banjo-strumming country boy, and for its visceral and notorious rape scene. In 2008, Deliverance was selected for preservation in the United States National Film Registry by the Library of Congress as being culturally, historically, or aesthetically significant. The item "Deliverance (1972) UK Quad Cinema Poster Linen-Backed Film Poster of the 70's" is in sale since Sunday, March 15, 2020. This item is in the category "DVDs, Films & TV\Film Memorabilia\Posters\Originals - UK Quads\1970s".